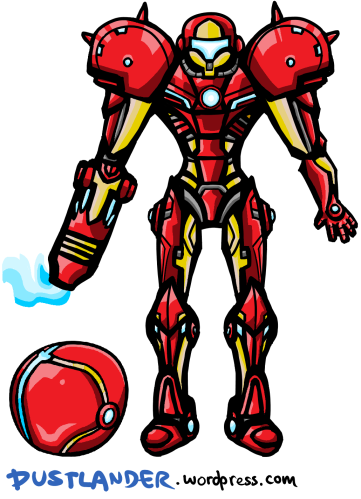 I guess this specific character, a combination of Tony Stark/Iron Man and Samus Aran, arrived at just the right time. I started creating her and similar mashup characters on a hunch after seeing Avengers: Age of Ultron, and I’ve finished her art just as Nintendo wraps us its E3 Digital Event and Treehouse Live presentation!

Even more surprising is the fact that a new Metroid game is in the works for the 3DS… but, unfortunately, it’s not at all what I was expecting. I’m happy to know it’s not just a 3-on-3 Blast Ball game (which was first shown at the Nintendo World Championships 2015), but I’m also getting a bit impatient. I mean, come on. The fans are ready. The Wii U is ready. Reggie’s body is ready. Give us Metroid Prime 4 already! (That, and Zelda Wii U.)