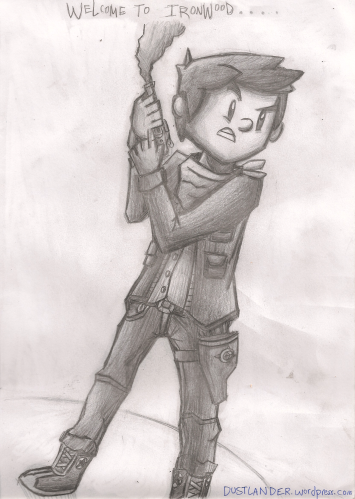 At last, Harold McClinton (last seen in Keep Running) makes his long-awaited return… but as a totally new character! Meet Vincent Cannon, Private Eye–a 19-year-old detective enlisted in some of the most dangerous work in the state of Nevada.

It’s 1989, and after a past life riddled with grave mistakes and even worse consequences, Vincent has moved to the city of Ironwood. Here, among the rows of cranes and buildings currently under construction, he finds a ruthless criminal underworld, a mysterious vigilante movement, and even a previous partner-in- detective work. When his line of work takes a turn for the worse, though, he’ll also have to find hope in the darkness and a reason for fight for what is right.

I understand that all of that was a little dense (read it again if you have to!), so, if you want to get a feel for what Ironwood will be like, I would recommend listening to Brandon Flowers’ “Digging Up the Heart” from his latest album The Desired Effect. As for my other projects (The Forging, Moon Man, and The Steampunks), related songs would include “Warriors” (Imagine Dragons), “The Moon-Atomic” (Angels and Airwaves), and “Radioactive” (Imagine Dragons, but preferably the Pentatonix and Lindsey Stirling version) respectively.

That’ll be it for now–and for this week, probably… I’m heading to Utah for another family reunion. Hopefully I’ll get some sketches done there, though! Until then…