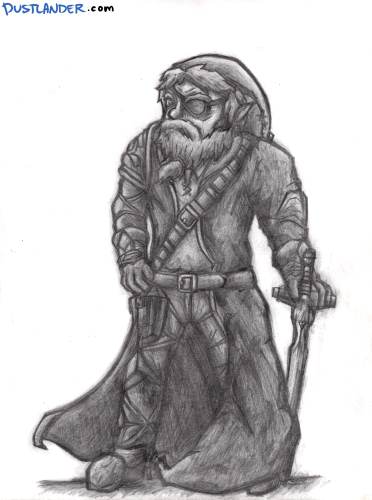 Honestly, summer’s sort of dragging along for me. It’s not nearly as restful or exciting as I’d hoped it would be… but that’s normal, I think.

Enough of that–I’ve got a great sketch for you today! The Internet has been abuzz about the new title in the Legend of Zelda franchise, Breath of the Wild, but I had in fact been working on this sketch for months before that game was even revealed. It’s hard to tell here, but the man above is none other than (arguably) the most important incarnation of Link, the Hero of Time. He’s pushing sixty or seventy, physically–but because he’s done so much time traveling over the years, his mind is well over a hundred years old. And his adventures didn’t stop after Majora’s Mask, either.

Indeed, in my own fanfiction/head canon, no one truly knew where Link went after the events of that game. One might presume he wandered the Lost Woods and fan-named Catacombs for ages, or that he traveled to distant lands and fought evil there. Regardless, the citizens of Hyrule do know one thing: centuries after his first disappearance, he’s back (albeit as an old man) to find the Master Sword and save the land one last time. This would be comparable to Han Solo’s return in Star Wars: The Force Awakens.

I almost think it would be cool for this story to make it into a game; not just any game, but an N64-style title (graphics and all) that would complete a so-called “Hero of Time Trilogy”. Seems like a good idea to me–what about you?

2 thoughts on “FANART: Link as an Old Man”